All in-person library events are canceled through the end of Jan due to the rapid spread of the Omicron variant in our region. 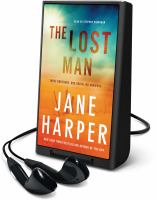 General Note
Title from Playaway label.
General Note
Originally published by Macmillan Audio ℗2019
General Note
Release date supplied by publisher.
General Note
Issued on Playaway, a dedicated audio media player.
General Note
One set of earphones and one AAA battery required for listening.
Participants/Performers
Performed by Stephen Shanahan.
Description
Two brothers meet in the remote Australian outback when the third brother is found dead, in this stunning new standalone audiobook from New York Times bestseller Jane Harper. Two brothers meet at the remote fence line separating their cattle ranches in the lonely outback. In an isolated belt of Western Australia, they are each others nearest neighbor, their homes four hours drive apart. The third brother lies dead at their feet. Something caused Cam, the middle child who had been in charge of the family homestead, to die alone in the middle of nowhere. So the eldest brother returns with his younger sibling to the family property and those left behind. But the fragile balance of the ranch is threatened. Amidst the grief, suspicion starts to take hold, and the eldest brother begins to wonder if more than one among them is at risk of crumbling as the weight of isolation bears down on them all. Dark, suspenseful, and deeply atmospheric, The Lost Man is the highly anticipated next audiobook from the bestselling and award-winning Jane Harper, author of The Dry and Force of Nature. Praise for The Lost Man: What an extraordinary novel: part family drama, part indelible ode to the Outback a thriller as forceful and atmospheric as a brewing storm. Harper works miracles. Were lucky to witness them. A.J. Finn, #1 New York Times bestselling author of The Woman in the Window.