A reaper at the gates
(Playaway) 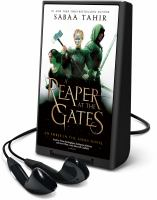 General Note
Title fron Playaway label.
General Note
Originally released by Listening Library ℗2018
General Note
Release date supplied by publisher.
General Note
Issued on Playaway, a dedicated audio media player.
General Note
One set of earphones and one AAA battery required for listening.
Creation/Production Credits
Director, Cathy Thornburn.
Participants/Performers
Read by Maxwell Caulfield, Steve West, Katharine McEwan & Fiona Hardingham.
Description
"Helene Aquilla, the Blood Shrike, is desperate to protect her sister's life and the lives of everyone in the Empire. Yet danger lurks on all sides. Emperor Marcus, haunted by his past, grows increasingly unstable and violent, while Keris Veturia, the ruthless Commandant, capitalizes on the Emperor's volatility to grow her own power -- regardless of the carnage she leaves in her path. Far to the east, Laia of Serra knows that the fate of the world lies not in the machinations of the Martial court, but in stopping the Nightbringer. During the hunt to bring him down, Laia faces unexpected threats from those she hoped would help her, and is drawn into a battle she never thought she'd have to fight. And in the land between the living and the dead, Elias Veturius has given up his freedom to serve as Soul Catcher. However, in doing so, he has vowed himself to an ancient power that demands his complete surrender -- even if that means abandoning the woman he loves."--,Provided by publisher.
Similar Series From NoveList
Similar Titles From NoveList
Similar Authors From NoveList
Borrower Reviews
Published Reviews
Reviews from GoodReads
Loading GoodReads Reviews.
Citations
APA Citation (style guide)