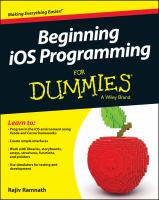 The ultimate beginner's guide to programming in the iOS environment

The Apple App Store is a gold mine for developers, but with more apps for the iPhone, iPad, and iPod touch being added every day, it?s essential to have a solid programming foundation to create the best apps possible. If you're eager to learn the ins and outs of iOS programming, this is your book. It teaches object-oriented programming within the iOS framework from the ground up, preparing you to create the next super iPhone or iPad app.

Get a handle on the iOS framework, object-oriented best practices, and the Xcode programming environment, then discover how to create simple interfaces, use libraries, create and extend objects, and more. Whether you're just starting out in programming or only new to iOS, For Dummies is the perfect beginning.

Focuses on teaching object-oriented programming within the iOS framework and includes best practices for building apps that are easy to debug, evolve, and maintain Uses simple examples to demonstrate object-oriented programming output in the iPhone environment while teaching real-world programming concepts and applications Provides a thorough understanding of the framework and object-oriented principles to help beginning programmers make optimum use of iOS Covers working with the Xcode environment and storyboards; creating simple interfaces; using libraries, functions, structures, arrays, and pointers; and creating and extending objects

Beginning iOS Programming For Dummies is your straightforward guide to getting started with iOS programming.

Note! Citation formats are based on standards as of July 2010. Citations contain only title, author, edition, publisher, and year published. Citations should be used as a guideline and should be double checked for accuracy.
Staff View
Grouped Work ID:
80e5a55a-2e47-4a6e-c9f8-da02954818e9
Go To GroupedWorkView in Staff Client