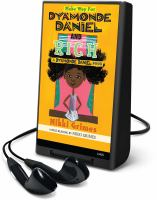 General Note
Title from Playaway label.
General Note
"HDAUDIO."
General Note
"One voice."
General Note
Release date supplied by publisher.
General Note
Previously released by Full Cast Audio, p2010.
General Note
Contains a collection of "Bundled" titles, previously released individually.
General Note
Issued on Playaway, a dedicated audio media player.
General Note
One set of earphones and one AAA battery required for playback.
Participants/Performers
A solo reading by Nikki Grimes.
Description
Make way for Dyamonde Daniel: Dyamonde has just moved to a new school, and she's impatient for a best friend. Then Free shows up, and there's an even newer kid in class who might also need a friend. Unfortunately, Free doesn't want to be friends. In fact, he seems to be in a permanently bad mood. Dyamonde is determined to find out what's bothering him. And when Dyamonde Daniel decides to do something, it usually gets done!
Description
Rich: Dyamonde Daniel's best friend, Free, thinks he's poor because he can't buy a new video game. So when their teacher announces a poetry contest with a $100 prize, Free decides he'll try to win it. But Free is not the only poet in the class. Before the contest is over everyone will know a little more about what being rich and being poor are really all about.