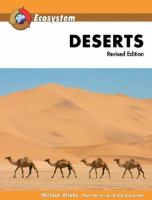 Description
Deserts cover nearly half the world and are classified as dry, semi-arid, arid, and hyper-arid. These include the hot deserts, such as the Sahara, the cold continental deserts such as the Gobi, the coastal deserts such as the Namib and Atacama, and the North American deserts. Providing an in-depth look at the history, geography, peoples, various surfaces, plants, and animals, ""Deserts, Revised Edition"" is an expanded update that will be useful to high school students interested in this fascinating ecosystem.The revised edition is substantially different from the first edition, with updated facts and figures, rewritten text, and new scientific research, including information on the climatic conditions that produce deserts and the climate cycles that make them expand and contract. ""Deserts, Revised Edition"" also explores the locations and general types of deserts, and provides detailed accounts of the most important deserts. It discusses the development and impact of the oil industry in Africa and the Middle East as well as the opportunities for tourism. It also explains the ways in which local weather can sometimes be manipulated. Diagrams, full-color photographs and illustrations, and informative sidebars enhance this accessible book.
Also in This Series

Note! Citation formats are based on standards as of July 2010. Citations contain only title, author, edition, publisher, and year published. Citations should be used as a guideline and should be double checked for accuracy.
Staff View
Grouped Work ID:
06fddde1-f3f7-6e2e-0b25-7559fd41c678
Go To GroupedWorkView in Staff Client