Z is for Zeus : a Greek mythology alphabet
(Book) 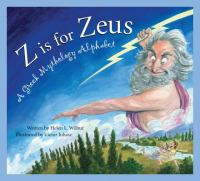 Description
Whose face launched a thousand ships? Who dropped an apple to win a race? What creature has the head of a woman, the body of a lion, the wings of an eagle, and always wakes up on the wrong side of the bed? The Oracle knows and so will young readers after they encounter the strange creatures, exotic gods, and exciting stories in Z is for Zeus: A Greek Mythology Alphabet.Human endeavors are often at oddswith the whims and the will and the ways of the gods.Although they're up in Olympus without any cares,they just can't stop meddling in human affairs.Helen Wilbur, who wrote the lively M is for Meow: A Cat Alphabet, brings the same wit and wisdom to explaining Greek mythology. Colorful, entertaining artwork from Victor Juhasz, the illustrator behind D is for Democracy and R is for Rhyme, keeps pace with the lively subject matter.Former librarian Helen L. Wilbur has been enchanted with Greek mythologyall her life. She has a BA in English Language and Literature from the Universityof Chicago and a master's degree in library science from Columbia University.Helen also authored M is for Meow: A Cat Alphabet. She lives in New York City.Victor Juhasz's clients include TIME, Rolling Stone, The New York Times,The Washington Post, and Warner Books. He also illustrated D is for Democracy: A Citizen's Alphabet; R is for Rhyme: A Poetry Alphabet;Everyone Counts: A Citizen's Number Book; and H is for Honor: A Military Family Alphabet. He lives in the New York Berkshires region.
Also in This Series

Description
"An A to Z introduction to Greek mythology including heros, gods and goddesses, the Iliad, Dephi, and Labyrinth. Each topic is introduced with a poem and includes detailed-filled expository text"--Provided by publisher.
Similar Series From NoveList
Similar Titles From NoveList
Similar Authors From NoveList
Borrower Reviews
Editorial Reviews
Published Reviews
Reviews from GoodReads
Loading GoodReads Reviews.
Tagging
Tags:

Note! Citation formats are based on standards as of July 2010. Citations contain only title, author, edition, publisher, and year published. Citations should be used as a guideline and should be double checked for accuracy.
Staff View
Grouped Work ID:
47bfdbde-8cec-e8b2-ce84-93588841fb02
Go To GroupedWorkView in Staff Client