Get the latest on service at NPL locations. 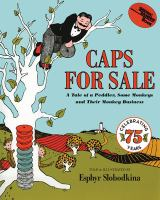 General Note
With page turn signals on side B, uninterrupted reading on side A.
General Note
"Illustrations copyright 1940, 1947, renewed 1968 by Esphyr Slobodkina." -- Sleeve.
General Note
"By arrangement with Addison Wesley Publiching Co., Inc." -- Sleeve.
Creation/Production Credits
Music composed by Larry Adler ; performed by Roger Heaton and Gilbert Bibarian ; produced and directed by George Mully.
Participants/Performers
Narrated by Megg Nicol with George Mully.
Description
The peddler wakes up bright and early, ready to begin his day and sell some caps. But everyone in town is missing. Where could they be? Then he realizes they must be at the county fair, and he rushes off to sell his caps to the crowd. Instead of selling, though, he finds himself caught in the middle of a circus on parade. And before he knows it, he and his caps are one of the star acts! Esphyr Slobodkina's classic artwork and timeless story are as endearing as ever in this new, refreshed edition. Come to the circus, one and all -- but don't forget those caps are for sale!
Similar Series From NoveList
Similar Titles From NoveList
Similar Authors From NoveList
Borrower Reviews
Published Reviews
Reviews from GoodReads
Loading GoodReads Reviews.
Citations
APA Citation (style guide)

Note! Citation formats are based on standards as of July 2010. Citations contain only title, author, edition, publisher, and year published. Citations should be used as a guideline and should be double checked for accuracy.
Staff View
Loading Staff View.
Powered By Aspen Discovery supported by ByWater Solutions
v. 21.07.01
CONNECT WITH US
Loading, please wait
...