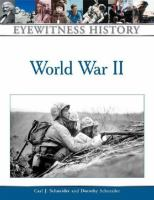 Description
World War II presents a unique blend of perspectives about what it felt like to be an American during the Second World War and the years that immediately preceded and followed it. This work examines how Americans faced the events and circumstances that shaped their lives during this difficult period. The differences that existed between civilian life at home and at work, between civilian and military life, and between life in each of the major armed forces branches meant that no American experienced these years in exactly the same way as any other. National issues from early contests over isolationism and interventionism to wartime debates over the protection of civil liberties to postwar deliberations over the role the United Nations should play in the world were also significant in determining individual experiences. Despite the differences, by the time the war years were behind them and the process of rebuilding had begun, there was an overwhelming sense among many Americans of having shared an unforgettable experience. World War II , a new addition to Facts On File's critically acclaimed Eyewitness History series, provides hundreds of firsthand accounts of the period from letters, speeches, and newspaper articles that illustrate how important historical events appeared to those who lived through them. Among the eyewitness testimonies included are those of Eleanor Roosevelt, Franklin D. Roosevelt, Harry S. Truman, Charles Lindbergh, James Farmer, John Steinbeck, William H. Hastie, Anne O Hare McCormick, George Marshall, James A. Michener, Douglas MacArthur, and Audie Murphy. In addition to the firsthand accounts, each chapter provides an introductory essay and a chronology of events. Valuable appendixes include excerpts from such informative documents as the Neutrality Act of 1937; Franklin Delano Roosevelt's address to Congress, December 8, 1941; the Preamble to the Charter of the United Nations; and the Nuremberg Trials Final Report as well as capsule biographies of more than 55 key figures and a look at the issue of refugees.
Also in This Series

Note! Citation formats are based on standards as of July 2010. Citations contain only title, author, edition, publisher, and year published. Citations should be used as a guideline and should be double checked for accuracy.
Staff View
Grouped Work ID:
6fe7143c-b3da-7738-9f80-0226ccbaef23
Go To GroupedWorkView in Staff Client