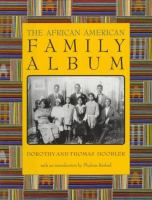 Description
The African American Family Album is a collection of the memories and experiences of a people who were first Africans, then slaves, and finally African Americans. Unlike most other immigrants to this country, the majority of Africans were brought to America against their will. The first slaves from Africa arrived in the Americas in the 16th century. Over the next 450 years, it is estimated that more than 11 million Africans (some think as many as 40 million) were taken from their homeland in the largest forcible movement of people in history. Torn from Africa, chained and forced to endure the "middle passage" to their new country, destined for a lifetime of slavery--this was the historical beginning of the American experience for most of today's African Americans. But there are cases of Africans who avoided or escaped that fate to becomes explorers and pioneers in the New World. Those fortunate few are also part of The African American Family Album, as are the 4 million African Americans who found themselves newly freed at the end of the Civil War. Their struggles to gain financial independence were thwarted by prejudice and hatred, and the enforced separation of the races. With little political or economic power, many found freedom to be but one step above slavery. The Great Migration between 1910 and 1950 brought millions from the tenant farms and towns of the South to settle in northern cities, one of the greatest population shifts the United States has ever experienced. This migration was one African Americans chose to make themselves. They moved for the same reasons that have brought other immigrant groups to the United States--to escape persecution and injustice and to find a better life. In the process, African Americans brought with them the blues, jazz, and gospel music that were to transform the culture of America. In cities and in the rural areas, in both the North and South, family loyalty, religion, and finally a movement for civil rights that brought purpose and hope to millions became key elements that held the African American family together. In their own words--from interviews, letters, diaries, newspaper articles, and published writings--the story of the African American unfolds in this moving and significant Family Album. Photographs culled from archives, news sources, and family collections make the history that is told here real and immediate. Profiles of Sojourner Turth, Booker T. Washington, W. E. B. Du Bois, Toni Morrison, and other notable African Americans are included, as are the words of such famous figures as Jackie Robinson, Spike Lee, Langston Hughes, Hank Aaron, Ralph Abernathy, and many others less famous who also proudly call themselves African Americans. They bring the story up to date, and reinforce the importance of their African roots to today's African American. Their history is part of our country's story now, and an important component in the great American Family Album.
Also in This Series

Note! Citation formats are based on standards as of July 2010. Citations contain only title, author, edition, publisher, and year published. Citations should be used as a guideline and should be double checked for accuracy.
Staff View
Grouped Work ID:
db5e5ee3-f5d3-05d2-a1b2-9cc4fb18fc40
Go To GroupedWorkView in Staff Client