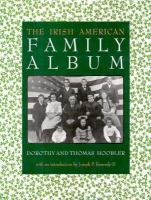 Description
Erin go bragh. Ireland forever. The popular Celtic saying is heard in the United States from New York to San Francisco because there are more than 39 million Americans who list their ancestry as Irish. Nearly 800,000 Irish arrived here between 1841 and 1850, and 900,000 followed over the next decade. In other words, more than one out of every five people in Ireland left for the United States in that 20-year period. The Irish American Family Album is a remarkable history and memoir. In their own words--from diary entries, letters, interviews, and personal reflections--and with photographs and clippings pulled from family archives and the press of the day, the rich and colorful history of the Irish immigration to this country is told with a passion and wit that is uniquely Irish. Life on the "ould sod" and the hardships of the great potato famine and British rule, the decision to leave, the arduous Atlantic journey, first impressions of their new home, settling in and building a new life--all are made immediate and real through the words and snapshots of the participants. But not all are happy memories. Most of the immigrants were young people and left Ireland with a heavy heart, believing that they would never again see those they left behind. They faced prejudice in this country--"No Irish Need Apply" was a familiar sign in shop windows and in newspaper advertisements--and living conditions in the tenements they could afford were a far cry from life on the farm back home. Many immigrants found their first jobs here as laborers. They were among the workers who built the Erie Canal, the transcontinental railroad, and the Statue of Liberty. In the west, Irish laborers found work as miners during the gold rush. Irish women often worked as servants in the houses of the upper class, or worked in the cloth mills of New England. Though prejudice tried to keep the majority at the bottom of society, the very size of the Irish American community made them a powerful political force, and in cities such as Boston, New York, and Chicago, the Irish took control of local political organizations and were soon a force to be reckoned with. There are many success stories in The Irish American Family Album. The Kennedy family, film actor John Wayne, artist Georgia O'Keeffe, novelist F. Scott Fitzgerald, and Sandra Day O'Connor, the first woman justice of the Supreme Court--all bear witness to the strength and endurance of the Irish spirit. These and other famous Irish Americans are profiled throughout the book. But the real joy comes in seeing the multitude of faces in the rare and fascinating photographs, and reading memories of Irish grandmothers, of boys who grew up in "Hell's Kitchen" at the turn of the century, of an early union organizer, and the thousand of other voices that make up the proud and diverse Irish American community. Their stories add an important chapter to the multicultural portrait of America.
Also in This Series

Note! Citation formats are based on standards as of July 2010. Citations contain only title, author, edition, publisher, and year published. Citations should be used as a guideline and should be double checked for accuracy.
Staff View
Grouped Work ID:
ee50bb71-b25d-395f-0736-ebfa643c9ae6
Go To GroupedWorkView in Staff Client