Ronald Reagan : an American hero : his voice, his values, his vision
(Book) 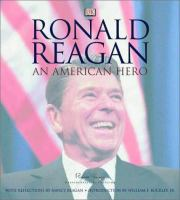 Description
A photo essay on the life and times of America's 40th President. "He did not adjust his beliefs to conform to prevailing political winds.... Instead he spoke directly from his heart to the hearts and minds of the American people. And, in doing so, he initiated the greatest love affair between an American President and his constituents in recent history." -- Frederick J. Ryan, Jr., chairman of the Ronald Reagan Presidential Foundation Even before he made the White House his home, Ronald Reagan spoke for the American people, capturing the hearts of small-town citizens and world leaders alike. His remarkable career in public life, spanning over fifty years, began in the Midwest, as a student leader and sports broadcaster, then in Hollywood as an actor and long-time director of the Screen Actors Guild, later as governor of California, and finally, as president of the United States. His legacy, too, is extraordinary: In the eight short years as president, Ronald Reagan presided over epochal international changes and ushered in unparalleled peace and prosperity--not only to his country but the world. Ronald Reagan: An American Hero is the story of Ronald Reagan's trials and triumphs, the story of his character and vision and values. It's the love story of a man for his wife, his country, and the world--the story of his unquenchable passion for liberty and life itself. Over 500 archival and full-color images, including many never-before-published photographs from Nancy Reagan's private collection and the Ronald Reagan Presidential Library and Museum, chronicle the milestones of America's fortieth president. Punctuating this visual history are close to 200 quotes from world leaders, actors, journalists, family, and friends who bear testimony to the greatness of the man who, for millions, has become an enduring American hero.
Also in This Series

Note! Citation formats are based on standards as of July 2010. Citations contain only title, author, edition, publisher, and year published. Citations should be used as a guideline and should be double checked for accuracy.
Staff View
Grouped Work ID:
13da3ed9-2cfd-c5a0-ccf0-f12e96545fcf
Go To GroupedWorkView in Staff Client