The ebola epidemic : the fight, the future
(Book) 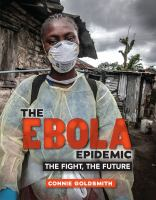 An ordinary blue thermos holding blood samples from a sick nun in Zaire reached Belgium's Institute of Tropical Medicine in September 1976. From the samples, researchers discovered a new virus, which they named the Ebola virus after a river in Central Africa. The virus killed two hundred eighty people before it seemingly disappeared into the jungle. No one suspected the virus would erupt in West Africa nearly four decades later to cause an unprecedented epidemic. Ebola has riveted--and terrified--the world since its reemergence from the jungle, killing more than eleven thousand people in West Africa since December 2013. Transmitted through bodily fluids--blood, saliva, sweat, vomit, feces, and semen--the disease causes high fever, widespread pain, nausea and vomiting, and severe diarrhea. Patients may develop dangerous bleeding and organ failure. With no effective treatment available, about 40 percent of infected people die within days. Using proper protective gear, safe burial protocols, cleansing techniques, and educational outreach, the disease has been slowed in Liberia, Guinea and Sierra Leone--at least temporarily. Can researchers develop vaccines quickly enough to prevent new outbreaks? Will Ebola move beyond West Africa? Readers will hear from Ebola survivors, learn what experts say about this devastating disease, and draw their own conclusions about whether another epidemic can be prevented.

Note! Citation formats are based on standards as of July 2010. Citations contain only title, author, edition, publisher, and year published. Citations should be used as a guideline and should be double checked for accuracy.
Staff View
Grouped Work ID:
b1c93b98-4bd1-0970-9073-d6a7f6ae259d
Go To GroupedWorkView in Staff Client