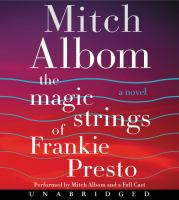 Mitch Albom creates his most unforgettable fictional character Frankie Presto, the greatest guitarist to ever walk the earth in this magical novel about the bands we join in life and the power of talent to change our lives.

An epic storyof the greatest guitar player to ever live, and the six lives he changedwith his magical blue strings.

In Albom s most sweeping novel yet, the voice of Music narrates the tale of its most beloved disciple, young Frankie Presto, a war orphan raisedby a blind music teacher inasmallSpanishtown. At nine years old, Frankieissent to Americain the bottom of a boat.His only possession is an old guitar and six precious strings.

But Frankie s talent is touched by the gods, and hisamazingjourney weaves him through the musical landscape of the 20thcentury, from classical to jazz to rock and roll, with his stunningtalent affectingnumerous stars along the way, including Hank Williams, Elvis Presley, Carole King, Wynton Marsalis and even KISS.

Frankie becomes a pop star himself. He makes records. He is adored. But his gift is also his burden, as he realizes, through his music, he can actually affect people s futures with one string turning blue whenever a life is altered.

At the height of his popularity, Frankie Presto vanishes. His legend grows. Only decades later, does he reappear just before his spectacular death to change one last life.

With its Forest Gump-like romp through the music world, The Magic Strings of Frankie Presto is a classic in the making. A lifelong musician himself, Mitch Albom delivers a remarkable novel, infused with the message that everyone joins a band in this life and those connections change us all.

General Note
Title from web page.
General Note
Compact discs.
Participants/Performers
Read by Mitch Albom and a full cast.
Description
This is the epic story of Frankie Presto - the greatest guitar player who ever lived - and the six lives he changed with his six magical blue strings. He makes records. He is adored. But Frankie Presto's gift is also his burden, as he realizes the power of the strings his teacher gave him, and how, through his music, he can actually affect people's lives. At the height of his popularity, tortured by his biggest mistake, he vanishes. His legend grows. Only decades later, having finally healed his heart, does Frankie reappear just before his spectacular death - to change one last life. With the Spirit of Music as our guide, we glimpse into the lives that were changed by one man whose strings could touch the music - and the magic - in each of us.
Similar Series From NoveList
Similar Titles From NoveList
Similar Authors From NoveList
Borrower Reviews
Editorial Reviews
Published Reviews
Reviews from GoodReads
Loading GoodReads Reviews.
Tagging
Tags:

Note! Citation formats are based on standards as of July 2010. Citations contain only title, author, edition, publisher, and year published. Citations should be used as a guideline and should be double checked for accuracy.
Staff View
Grouped Work ID:
d934bf48-c51a-a3a9-a702-f101fe964bc6
Go To GroupedWorkView in Staff Client