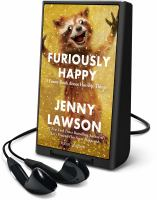 Description
Because sometimes crazy is just right. A humor memoir tinged with just enough tragedy and pathos to make it worthwhile, FURIOUSLY HAPPY is a deeply personal book in which Jenny Lawson examines what it is to live with severe depression as well as a host of other conditions and how it can lead to experiencing life in its fullest: "According to the many shrinks I've seen in the last two decades I am a high-functioning depressive with severe anxiety disorder, mild bipolar tendencies, moderate clinical depression, mild self-harm issues, impulse control disorder, and occasional depersonalization disorder. Also, sprinkled in like paprika over a mentally unbalanced devil egg, are mild OCD and trichotillomania, which is always nice to end on, because whenever people hear the word mania' they automatically back off and give you space on crowded airplanes. Probably because you're not supposed to talk about having manias when you're on a crowded airplane. This is one of the reasons why my husband hates to fly with me. The other reason is I often fly with taxidermied creatures and anxiety service animals. We don't travel a lot together because he doesn't understand awesomeness."Hysterical, honest, poignant, and more than a little bit peculiar, FURIOUSLY HAPPY is Jenny's deeply personal story and also a vastly universal one. And have no fear, taxidermied animals will be making cameo appearances throughout.
Also in This Series

Note! Citation formats are based on standards as of July 2010. Citations contain only title, author, edition, publisher, and year published. Citations should be used as a guideline and should be double checked for accuracy.
Staff View
Grouped Work ID:
fbde499b-cfd0-7ce5-064d-ea9c136d8347
Go To GroupedWorkView in Staff Client