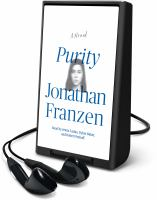 Description
Jonathan Franzen's huge-canvased new book is about identity, the Internet, sexual politics, and loveamong countless other things. It's deeply troubling, richly moving, and hilariousfeaturing an unforgettable cast of inimitable Franzenian characters who grapple mightily and rewardingly with the great issues of our time and culture. Purity Tyler, known to all as Pip, is an outspoken, forthright young woman struggling to make a life for herself. She sleeps in a rickety commune in Oakland. She's in love with an unavailable older man and is saddled with staggering college debt. She has a crazy mother and doesn't know who her father is. A chance encounter leads her to an internship in South America with the world-famous Sunlight Project, which uses the Internet to expose government and corporate fraud and malfeasance. TSP is the brainchild of Andreas Wolf, a charismatic genius who grew up privileged but disaffected in the German Democratic Republic. Forced to run TSP in Bolivia because of the hostility of European nations whose misdeeds he has exposed, Andreas is drawn to Pip for reasons she doesn't understand. Like numerous women before her, she becomes obsessed with Andreas, and they have an intense, unsettling relationship. Eventually, he finds her work at an online magazine in Denver with Tom Aberant, who, with his life partner, Leila Helou, uses old-fashioned reporting to achieve some of the same results that TSP seems to pull out of thin air. That's the top story. What lies underneath is a wild tale of hidden identities, secret wealth, neurotic fidelity, sociopathy, and murder. The truth of Pip's parentage lies at the center of this maelstrom, but before it is resolved Franzen takes us from the rain-drenched forests of northern California, to paranoid East Berlin before the fall of the Wall, to the paradisiacal mountain valley
Also in This Series

General Note
Issued on Playaway, a dedicated audio media player.
General Note
One set of earphones and one AAA battery required for listening.
General Note
Issued also in another format by Macmillan Audio, p2015.
Participants/Performers
Read by Jenna Lamia, Dylan Baker, and Robert Petkoff.
Description
Young Pip Tyler doesn't know who she is. She knows that her real name is Purity, that she's saddled with $130,000 in student debt, that she's squatting with anarchists in Oakland, and that her relationship with her mother--her only family--is hazardous. But she doesn't have a clue who her father is, why her mother has always concealed her own real name, or how she can ever have a normal life.
System Details
Playaway Digital Audio.
Similar Series From NoveList
Similar Titles From NoveList
Similar Authors From NoveList
Borrower Reviews
Editorial Reviews
Published Reviews
Reviews from GoodReads
Loading GoodReads Reviews.
Tagging
Tags:

Note! Citation formats are based on standards as of July 2010. Citations contain only title, author, edition, publisher, and year published. Citations should be used as a guideline and should be double checked for accuracy.
Staff View
Grouped Work ID:
29c09fb8-c728-d10b-e732-099a5580ca57
Go To GroupedWorkView in Staff Client