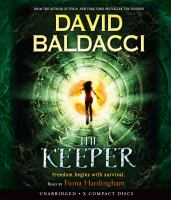 Description
DIVVega Jane was always told no one could leave the town of Wormwood. She was told there was nothing outside but the Quag, a wilderness filled with danger and death. And she believed it - until the night she stumbled across a secret that proved that everything she knew was a lie.BR /BR / Now just one thing stands between Vega Jane and freedom - the Quag. In order to leave Wormwood and discover the truth about her world, Vega and her best friend Delph must find a way to make it across a terrifying land of bloodthirsty creatures and sinister magic. But the Quag is worse than Vega Jane's darkest imagining. It's a living, breathing prison designed to keep enemies out and the villagers of Wormwood in.BR /BR / The Quag will throw everything at Vega Jane. It will try to break her. It will try to kill her. And survival might come at a price not even Vega Jane is willing to pay.BR /BR / Master storyteller David Baldacci unleashes a hurricane of action and adrenaline that takes readers to the breaking point./DIV;DIVPraise for IThe Finisher /I BR /BR / "This vividly described tale takes readers to an original fantasy world full of strange creatures, intriguing relationships, and long-lost secrets. Baldacci knows how to deliver thrills." -- Brandon Mull, #1 INew York Times/I bestselling author of the Fablehaven seriesBR /BR / "IThe Finisher /Iis an enchanting romp through a fantastical world worthy of Rowling or Brooks. Baldacci proves that his pen can engage youth as well as adults." - Richard Paul Evans, #1 INew York Times /Ibestselling author of the Michael Vey seriesBR /BR / "Vega Jane has stolen my heart. I"ve read several novels in the last few years with female protagonists and none of them are as amazing as Vega. . . . . Her adventures must be continued. To not do so would be a crime. This is the female protagonist I want my daughters to read and emulate." - ISciFi Pulse/IBR /BR / * "What happens when an international best-selling crime novelist tries his hand at a youth fantasy? Well, in this case, success." -- IBooklist/I, starred reviewBR /BR / "Best known for his adult crime novels, Baldacci makes a detour into middle-grade with this wildly fanciful and darkly intriguing tale of a girl forced to fight for her life as she investigates the secrets of her tiny community." -- IPublishers Weekly/I/DIV;DIVDavid Baldacci is a global #1 bestselling author. His books are published in over forty-five languages and in more than eighty countries; over 110 million copies are in print. His works have been adapted for both feature film and television. He is also the cofounder, along with his wife, of the Wish You Well Foundation, which supports literacy efforts across America. David and his family live in Virginia. br/br/DIV
Also in This Series

General Note
Unabridged.
General Note
Compact discs.
Participants/Performers
Read by Fiona Hardingham.
Description
Vega Jane was always told no one could leave the town of Wormwood. She was told there was nothing outside but the Quag, a wilderness filled with danger and death. And she believed it--until the night she stumbled across a secret that proved that everything she knew was a lie.
Similar Series From NoveList
Similar Titles From NoveList
Similar Authors From NoveList
Borrower Reviews
Editorial Reviews
Published Reviews
Reviews from GoodReads
Loading GoodReads Reviews.
Tagging
Tags:

Note! Citation formats are based on standards as of July 2010. Citations contain only title, author, edition, publisher, and year published. Citations should be used as a guideline and should be double checked for accuracy.
Staff View
Grouped Work ID:
17d79b37-fc93-736f-36e1-4fbdc6eaff1c
Go To GroupedWorkView in Staff Client