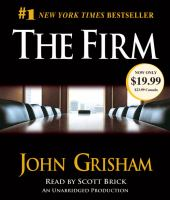 Description
John Grisham's best-selling audiobook, The Firm , is now a series on NBC! At the top of his class at Harvard Law, he had  his choice of the best in America. He made a deadly  mistake. When Mitch McDeere signed on with  Bendini, Lambert & Locke of Memphis, he thought he  and his beautiful wife, Abby, were on their way.  The firm leased him a BMW, paid off his school  loans, arranged a mortgage and hired him a  decorator. Mitch McDeere should have remembered what his  brother Ray -- doing fifteen years in a Tennessee  jail -- already knew. You never get nothing for  nothing. Now the FBI has the lowdown on Mitch's  firm and needs his help. Mitch is caught between a  rock and a hard place, with no choice -- if he  wants to live.
Also in This Series

General Note
In one container.
General Note
Unabridged.
General Note
"BOT Books on Tape."
Participants/Performers
Read by Scott Brick.
Description
A young rising star in the legal world lands the job of a lifetime when he takes a position at a prestigious law firm. Despite a little uneasiness, things seem to be going well. Unfortunately, though, an FBI probe puts this young lawyer in the middle of a dangerous nightmare, which includes some dark and sinister secrets within the firm.
Similar Series From NoveList
Similar Titles From NoveList
Similar Authors From NoveList
Borrower Reviews
Editorial Reviews
Published Reviews
Reviews from GoodReads
Loading GoodReads Reviews.
Tagging
Tags:

Note! Citation formats are based on standards as of July 2010. Citations contain only title, author, edition, publisher, and year published. Citations should be used as a guideline and should be double checked for accuracy.
Staff View
Grouped Work ID:
f6fc2dc1-78ae-2849-40f2-443a30a8f9a3
Go To GroupedWorkView in Staff Client