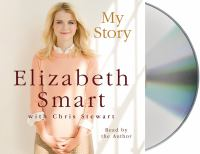 Description
Ten years after her abduction from her Salt Lake City bedroom, Elizabeth Smart's powerful memoir reveals how she survived and the secret to forging a new life in the wake of a brutal crime On June 5, 2002,&nbspfourteen-year-old Elizabeth Smart, the daughter of a middle class Mormon family, was taken from her home in the middle of the night by religious fanatic and sexual predator, Brian David Mitchell, and his wife, Wanda Barzee.&nbspShe was kept chained, dressed in disguise, repeatedly raped and told she and her family would be killed if she tried to escape.&nbspAfter her rescue on March 12, 2003, she rejoined her family and &nbsptried to pick up the pieces of her life. Now, in  My Story, &nbspshe tells of the constant gut-wrenching fear she endured every hour and her courageous&nbspdetermination to maintain hope and to have faith in her rescue and in the innate goodness of others.&nbspShe explains how her choice helped her stay sane in the midst of a nightmare and how she found the strength to confront her captors at their trial and see that justice was served. Subsequently, Elizabeth has created a foundation to help those who have confronted similar horrendous abuse and is a frequent public speaker.&nbspIn  2012, she married Matthew Gilmour, whom she met doing mission work in Paris, in a fairy tale wedding that made the cover of People Magazine.
Also in This Series

Note! Citation formats are based on standards as of July 2010. Citations contain only title, author, edition, publisher, and year published. Citations should be used as a guideline and should be double checked for accuracy.
Staff View
Grouped Work ID:
f1d6707c-fd75-9821-1e41-5a49faee86c8
Go To GroupedWorkView in Staff Client