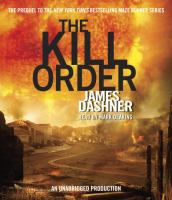 Book four in the blockbuster Maze Runner series that spawned a movie franchise and ushered in a worldwide phenomenon And don't miss The Fever Code, the highly-anticipated series conclusion that finally reveals the story of how the maze was built

Before WICKED was formed, before the Glade was built, before Thomas entered the Maze, sun flares hit the earth, killing most of the population. Mark and Trina were there when it happened. They survived. But now a virus is spreading. A virus that fills humans with murderous rage. They're convinced that there's a way to save those who are left-- if they can stay alive. Because in this new, devastated world, every life has a price. And to some you're worth more dead than alive. The end is only the beginning.

" A] mysterious survival saga that passionate fans describe as a fusion of Lord of the Flies , The Hunger Games , and Lost . " --EW.com

"James Dashner's illuminating prequel The Kill Order ] will thrill fans of this Maze Runner series] and prove just as exciting for readers new to the series." -- Shelf Awareness , Starred

" Take a deep breath before you start any James Dashner book." -- Deseret News

General Note
Prequel to: The maze runner.
General Note
Compact disc.
General Note
Duration: 10:00:00.
Participants/Performers
Read by Mark Deakins.
Description
"Before 'Wicked' was formed, before the Glade was built, before Thomas entered the Maze, sun flares hit the earth and destroyed the world mankind took for granted. ... [This] is the story of the fall of civilization and the disease that started it all"--Container.
Similar Series From NoveList
Similar Titles From NoveList
Similar Authors From NoveList
Borrower Reviews
Editorial Reviews
Published Reviews
Reviews from GoodReads
Loading GoodReads Reviews.
Tagging
Tags:
trilogy 1

Note! Citation formats are based on standards as of July 2010. Citations contain only title, author, edition, publisher, and year published. Citations should be used as a guideline and should be double checked for accuracy.
Staff View
Grouped Work ID:
bad354e9-57db-08f6-735d-0d92018cdabb
Go To GroupedWorkView in Staff Client