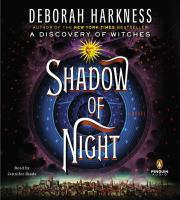 Description
"Together we lifted our feet and stepped into the unknown" - the thrilling sequel to the New York Times bestseller "A Discovery of Witches" Deborah Harkness exploded onto the literary scene with her debut novel, "A Discovery of Witches", Book One of the magical All Souls Trilogy and an international publishing phenomenon. The novel introduced Diana Bishop, Oxford scholar and reluctant witch, and the handsome geneticist and vampire Matthew Clairmont; together they found themselves at the center of a supernatural battle over an enchanted manuscript known as Ashmole 782. The story picks up from "A Discovery of Witches'" cliffhanger ending. "Shadow of Night" plunges Diana and Matthew into Elizabethan London, a world of spies, subterfuge, and a coterie of Matthew's old friends. This mysterious School of Night includes Christopher Marlowe and Walter Raleigh. Here, Diana must locate a witch to tutor her in magic, Matthew is forced to confront a past he thought he had put to rest, and the mystery of Ashmole 782 deepens. Deborah Harkness has crafted a gripping journey through a world of alchemy, time travel, and magical discoveries, delivering one of the most hotly anticipated novels of the season.
Also in This Series

Note! Citation formats are based on standards as of July 2010. Citations contain only title, author, edition, publisher, and year published. Citations should be used as a guideline and should be double checked for accuracy.
Staff View
Grouped Work ID:
7402fc02-7c65-dbf5-d8e6-2d106e846311
Go To GroupedWorkView in Staff Client