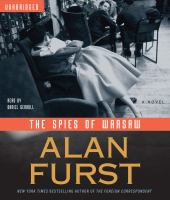 Autumn 1937: War is coming to Europe. French and German intelligence operatives are locked in a life-and-death struggle on the espionage battlefield. At the French embassy, the new military attach , Colonel Jean-Fran ois Mercier, a decorated hero of the 1914 war, is drawn into a world of abduction, betrayal, and intrigue in the diplomatic salons and back alleys of Warsaw. At the same time, the handsome aristocrat finds himself in a passionate love affair with a Parisian woman of Polish heritage, a lawyer for the League of Nations.

Colonel Mercier must work in the shadows, amid an extraordinary cast of venal and dangerous characters -- Colonel Anton Vyborg of Polish military intelligence; the mysterious and sophisticated Dr. Lapp, senior German Abwehr officer in Warsaw; Malka and Viktor Rozen, at work for the Russian secret service; and Mercier's brutal and vindictive opponent, Major August Voss of SS counterintelligence. And there are many more, some known to Mercier as spies, some never to be revealed.

General Note
Unabridged.
General Note
Compact discs.
Creation/Production Credits
Producer and director, Carol Shapiro.
Participants/Performers
Read by Daniel Gerroll.
Description
A thrilling new espionage novel set in WWII-era France and Poland. There are twenty-one spies at war on the espionage battlefield that was Warsaw in 1937. For France and Germany, survival is at stake. At the French embassy, a new military attache joins the fight. He is Colonel Jean-Francois Mercier, a decorated hero now drawn into a world of abduction, betrayal, and intrigue in the diplomatic drawing rooms and back alleys of the city.
Similar Series From NoveList
Similar Titles From NoveList
Similar Authors From NoveList
Borrower Reviews
Editorial Reviews
Published Reviews
Reviews from GoodReads
Loading GoodReads Reviews.
Tagging
Tags:

Note! Citation formats are based on standards as of July 2010. Citations contain only title, author, edition, publisher, and year published. Citations should be used as a guideline and should be double checked for accuracy.
Staff View
Grouped Work ID:
f05cad2a-3f80-9523-f79e-6b3c33467807
Go To GroupedWorkView in Staff Client