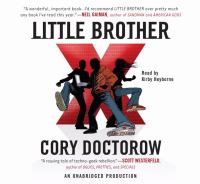 Description
Marcus, aka w1n5t0n, is only seventeen years old, but he gures he already knows how the system works and how to work the system. Smart, fast, and wise to the ways of the networked world, he has no trouble outwitting his high school s intrusive but clumsy surveillance systems.But his whole world changes when he and his friends nd themselves caught in the aftermath of a major terrorist attack on San Francisco. In the wrong place at the wrong time, Marcus and his crew are apprehended by the Department of Homeland Security and whisked away to a secret prison, where they re mercilessly interrogated for days. When the DHS nally releases them, Marcus discovers that his city has become a police state, where every citizen is treated like a potential terrorist. He knows that no one will believe his story, which leaves him only one option: to take down the DHS himself.Can one teenage hacker ght back against a government out of control? Maybe, but only if he s really careful . . . and very, very smart."
Also in This Series

General Note
Unabridged.
General Note
Compact discs.
Participants/Performers
Read by Kirby Heyborne.
Description
After being interrogated for days by the Department of Homeland Security in the aftermath of a major terrorist attack on San Francisco, California, seventeen-year-old Marcus, released into what is now a police state, decides to use his expertise in computer hacking to set things right.
Similar Series From NoveList
Similar Titles From NoveList
Similar Authors From NoveList
Borrower Reviews
Editorial Reviews
Published Reviews
Reviews from GoodReads
Loading GoodReads Reviews.
Tagging
Tags:
fiction 1
ya 1

Note! Citation formats are based on standards as of July 2010. Citations contain only title, author, edition, publisher, and year published. Citations should be used as a guideline and should be double checked for accuracy.
Staff View
Grouped Work ID:
255c657a-cd76-036c-8857-87cd8314b663
Go To GroupedWorkView in Staff Client