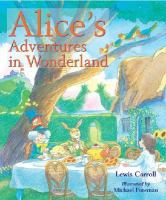 Description
A newly illustrated version of the children's classic by the acclaimed artist Michael Foreman--two-time winner of the Kate Greenaway Award and many others. The art brings the "real" Alice into the wonderland she inspired. One of the most beloved children's stories of all time now has new and magical illustrations, based on the child who inspired the tale. Artist Michael Foreman studied Charles Lutwidge Dodson's (Lewis Carroll) original photographs of the real Alice before embarking on this project. The result is a bold, mischievous, and very real character that is surprisingly modern. As Foreman notes, young Alice Liddell "looked ready to break out of the Victorian photograph and run free." This painted Alice seems that way, too, wearing her simple pale striped dress, white stockings, and brown button boots. Other characters in the book have their basis in real people, too: Old Father William resembles Alice's father, Henry Liddell, and the young man is Lewis Carroll himself. And there is a real contrast between Alice's "normal" world, shown in sepia, and the bright, brilliant colors of the wonderland she discovers. Michael Foreman was born in the seaside town of Pakefield, England, and received his M.A. from the Royal College of Art. He is a two-time winner of the prestigious Kate Greenaway Award, and has also received the Smarties Book Prize, The Kurt Maschler Award, the Children's Book Award, the Bologna Book Prize and the Francis William's Illustration Award.
Also in This Series

Note! Citation formats are based on standards as of July 2010. Citations contain only title, author, edition, publisher, and year published. Citations should be used as a guideline and should be double checked for accuracy.
Staff View
Grouped Work ID:
565014a2-be34-6a09-00fe-0a0df426bf64
Go To GroupedWorkView in Staff Client