Catalog The Giant and the beanstalk / »  Book »

The Giant and the beanstalk
(Book) 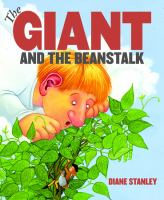 Description
For a giant, Otto is embarrassingly polite. While all the other giants are studying Cursing, Growling, and Stomping, Otto just wants to play with his pet hen, Clara. Then one terrible day a wily human named Jack climbs up a magic beanstalk and steals her away! Knowing only the thief's name, Otto must find Clara and rescue her from the land of fairy tales and nursery rhymes. The only problem is, there seem to be an awful lot of Jacks down there.... Diane Stanley, author and illustrator of goldie and the three bears and rumpelstiltskin's daughter, once again brings a fresh vision to a beloved story. Readers will delight in recognizing their favorite Jacks as Otto travels throughout the kingdom to find Clara. With great humor and beautiful illustrations, Diane Stanley creates a satisfying tale in which Jack, Jack, Jack, Jack, Jack, Jack, and Otto all live happily ever after.
Also in This Series

Note! Citation formats are based on standards as of July 2010. Citations contain only title, author, edition, publisher, and year published. Citations should be used as a guideline and should be double checked for accuracy.
Staff View
Grouped Work ID:
ec840fa0-1e2b-374d-ae6c-370dfd133a71
Go To GroupedWorkView in Staff Client