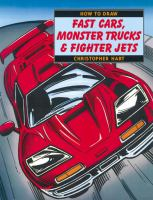 Description
Any kid who's ever dreamed of owning a Ferrari, getting behind the wheel of a huge truck or a fierce fighter jet--or at least being able to whip out a pencil and amaze friends by drawing them all--will race to get a copy of this coolest of how-to art instructionals. All of the most spectacular makes are included, from Lamborghini to Lotus to Porsche, as well as the entire array of American muscle cars. Timeless classics are highlighted, such as the Jaguar E-Type and the "Gullwing" Mercedes-Benz 300 SL Coupe, as are Formula One, stock, and rally cross racing cars. Authentic diagrams and blueprints show exactly how a car is built and how an engine works. Instead of being shown in static isolation, models are depicted racing, going around hairpin turns, crashing, and in other exciting scenes, and immensely popular monster trucks are shown in eye-popping action, crushing rows of cars. The author takes his students to even greater heights with lessons in drawing awesome stealth fighters and other U.S. Air Force jets, bombers, and Apache helicopters.
Also in This Series

Note! Citation formats are based on standards as of July 2010. Citations contain only title, author, edition, publisher, and year published. Citations should be used as a guideline and should be double checked for accuracy.
Staff View
Grouped Work ID:
95586e4d-5707-30da-77c4-6437a5d13109
Go To GroupedWorkView in Staff Client