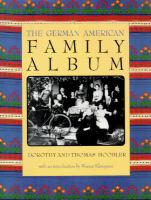 Description
"My grandparents valued freedom, but even more they valued opportunity. They appreciated America for that gift."--Bill Eckhardt, a third-generation German American.Descendants of German immigrants form the largest single ethnic group among the United States population today. They came to this country as farmers and craftspeople, students, teachers, and laborers, and today they count among their descendants Presidents of the United States, sports stars,entertainers, scientists, writers, and businessmen. In fact, German American influences are so deeply embedded in the culture of the United States that many people are unaware of their origins. Hamburgers and hotdogs, American kindergarten ("children's garden" in German), most of the customs weassociate with Christmas, and even the Easter bunny and his eggs all spring from the German American community.The German American Family Album traces the growth of that community from the first German to reach the New World in the year 1000 (his name was Tyrker and he was a companion of the Scandinavian seafarer Leif Eriksson) to the 7 million German Americans in this country today. In their ownwords--from diary entries, letters, interviews, and personal reflections--and with photographs and clippings culled from family archives and the press of the day, we learn of their life in the old country, of the decision to leave home, the often wretched trip to America, and the new life they foundonce they got here. Their three-centuries-long history of achievement in the United States is a moving and inspirational story. To see it and hear it through the eyes of the immigrant is an experience that makes history personal and immediate.
Also in This Series

Note! Citation formats are based on standards as of July 2010. Citations contain only title, author, edition, publisher, and year published. Citations should be used as a guideline and should be double checked for accuracy.
Staff View
Grouped Work ID:
5c1cbee0-1763-b78b-55a1-cb0b79df8470
Go To GroupedWorkView in Staff Client