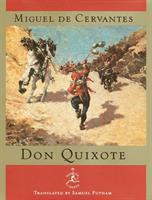 Description
"Don Quixote is practically unthinkable as a living being," said novelist Milan Kundera. "And yet, in our memory, what character is more alive?" ----Widely regarded as the world's first modern novel, Don Quixote chronicles the famous picaresque adventures of the noble knight-errant Don Quixote de La Mancha and his faithful squire, Sancho Panza, as they travel through sixteenth-century Spain. This Modern Library edition presents the acclaimed Samuel Putnam translation of the epic tale, complete with notes, variant readings, and an Introduction by the translator. ----The debt owed to Cervantes by literature is immense. From Milan Kundera- "Cervan- tes is the founder of the Modern Era. . . . The novelist need answer to no one but Cervantes." Lionel Trilling observed- "It can be said that all prose fiction is a variation on the theme of Don Quixote." Vladmir Nabo-kov wrote- "Don Quixote is greater today than he was in Cervantes's womb. He looms so wonderfully above the skyline of literature, a gaunt giant on a lean nag, that the book lives and will live through his sheer vitality. . . . He stands for everything that is gentle, forlorn, pure, unselfish, and gallant. The parody has become a paragon." And V. S. Pritchett observed- "Don Quixote begins as a province, turns into Spain, and ends as a universe. . . . The true spell of Cervantes is that he is a natural magician in pure story-telling." The Modern Library has played a significant role in American cultural life for the better part of a century. The series was founded in 1917 by the publishers Boni and Liveright and eight years later acquired by Bennett Cerf and Donald Klopfer. It provided the foun- dation for their next publishing venture, Random House. The Modern Library has been a staple of the American book trade, providing readers with affordable hardbound editions of important works of literature and thought. For the Modern Library's seventy-fifth anniversary, Random House redesigned the series, restoring as its emblem the running torchbearer created by Lucian Bernhard in 1925 and refurbishing jackets, bindings, and type, as well as inaugurating a new program of selecting titles. The Modern Library continues to provide the world's best books, at the best prices.
Also in This Series

Note! Citation formats are based on standards as of July 2010. Citations contain only title, author, edition, publisher, and year published. Citations should be used as a guideline and should be double checked for accuracy.
Staff View
Grouped Work ID:
b30dc11e-36e2-63ac-1d11-1d1df26aa5f9
Go To GroupedWorkView in Staff Client