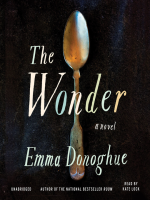 Description
A 2016 Shirley Jackson Awards Finalist*The latest masterpiece by Emma Donoghue, bestselling author of Room* In the latest masterpiece by Emma Donoghue, bestselling author of Room, an English nurse brought to a small Irish village to observe what appears to be a miracle-a girl said to have survived without food for months-soon finds herself fighting to save the child's life.Tourists flock to the cabin of eleven-year-old Anna O'Donnell, who believes herself to be living off manna from heaven, and a journalist is sent to cover the sensation. Lib Wright, a veteran of Florence Nightingale's Crimean campaign, is hired to keep watch over the girl.Written with all the propulsive tension that made Room a huge bestseller, THE WONDER works beautifully on many levels—a tale of two strangers who transform each other's lives, a powerful psychological thriller, and a story of love pitted against evil. ACCLAIM FOR THE WONDER: "Deliciously gothic.... Dark and vivid, with complicated characters, this is a novel that lodges itself deep" (USA Today, 3/4 stars); "Heartbreaking and transcendent" (New York Times); "A fable as lean and discomfiting as Anna's dwindling body.... Donoghue keeps us riveted" (Chicago Tribune); "Donoghue poses powerful questions about faith and belief" (Newsday)
Also in This Series