Catalog You Will Know Me »  Books »

You Will Know Me: A Novel
(OverDrive Listen, OverDrive MP3 Audiobook) 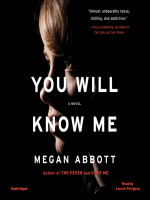 Description
The audacious new novel from bestselling author Megan Abbott, "one of the best living mystery writers" (Grantland).Katie and Eric Knox have dedicated their lives to their fifteen-year-old daughter Devon, a gymnastics prodigy and Olympic hopeful. But when a violent death rocks their close-knit gymnastics community just weeks before an all-important competition, everything the Knoxes have worked so hard for feels suddenly at risk. As rumors swirl among the other parents, revealing hidden plots and allegiances, Katie tries frantically to hold her family together while also finding herself drawn, irresistibly, to the crime itself, and the dark corners it threatens to illuminate. From a writer with "exceptional gifts for making nerves jangle and skin crawl," (Janet Maslin) You Will Know Me is a breathless rollercoaster of a novel about the desperate limits of desire, jealousy, and ambition.
Also in This Series

Megan Abbott. (2016). You Will Know Me: A Novel. Unabridged Hachette Book Group.

Megan Abbott. 2016. You Will Know Me: A Novel. Hachette Book Group.

Megan Abbott, You Will Know Me: A Novel. Hachette Book Group, 2016.

Megan Abbott. You Will Know Me: A Novel. Unabridged Hachette Book Group, 2016.