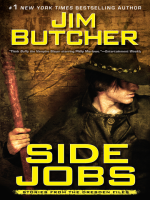 Description
With tales ranging from the deadly serious to the absurdly hilarious—including an original story for this volume—Side Jobs is a must-have collection for every devoted Harry Dresden fan.As Chicago's only professional wizard, Harry Dresden has had cases that have pitted him against insane necromancers, power-hungry faerie queens, enigmatic dark wizards, fallen angels—pretty much a "who's who" of hell and beyond—with the stakes in each case ranging from a lone human soul to the entire human race. But not every adventure Harry Dresden undertakes is an epic tale of life and death in a world on the edge of annihilation.Here, together for the first time in paperback, are the shorter works of #1 New York Times bestselling author Jim Butcher—a compendium of cases that Harry and his cadre of allies managed to close in record time."One of the giants of urban fantasy...delivers some great stories in this volume...This is a great collection, featuring a hero who's proven himself over and over again, as well as delving into the odd corners of his fascinating and fantastic world. Highly recommended."—SFRevu
Also in This Series