Catalog Death in the Clouds »  eBook » 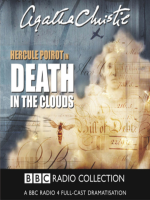 Description
To distract himself from his fear of flying, Hercule Poirot observes his fellow passengers on the noon flight from Le Bourget to Croydon. On his right sits a pretty young woman, clearly very aware of the handsome man opposite her; ahead of him is a nervous aristocrat and her maid; and across the aisle is a writer of detective novels, troubled by an aggressive wasp. Lulled into drowsiness by a sedative he has taken, Poirot abruptly awakens when the woman behind him is found dead. A reaction to a wasp-sting is suggested, but Poirot discovers that a poisoned dart is the real cause - and a blow pipe is discovered stuffed down the back of his own seat. The murderer can only be one of the eleven passengers in the rear of the plane, or one of the stewards. The dead woman was a moneylender to the upper classes, so the Countess, addicted to cocaine and gambling, is an obvious suspect. Or could it be the detective writer, trying out a plot for his new book? No-one is above suspicion: not even Poirot himself. He must unravel this baffling mystery - if only to clear his own name... John Moffatt stars as the great Belgian detective, with Philip Jackson as Inspector Japp.
Also in This Series