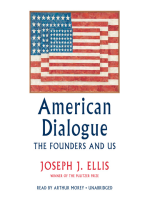 Description
The award-winning author of Founding Brothers and The Quartet now gives us a deeply insightful examination of the relevance of the views of George Washington, Thomas Jefferson, James Madison, and John Adams to some of the most divisive issues in America today.The story of history is a ceaseless conversation between past and present, and in American Dialogue Joseph J. Ellis focuses the conversation on the often-asked question "What would the Founding Fathers think?" He examines four of our most seminal historical figures through the prism of particular topics, using the perspective of the present to shed light on their views and, in turn, to make clear how their now centuries-old ideas illuminate the disturbing impasse of today's political conflicts. He discusses Jefferson and the issue of racism, Adams and the specter of economic inequality, Washington and American imperialism, Madison and the doctrine of original intent. Through these juxtapositions—and in his hallmark dramatic and compelling narrative voice—Ellis illuminates the obstacles and pitfalls paralyzing contemporary discussions of these fundamentally important issues.Cover image: Three Flags, 1958 by Jasper Johns. Encaustic on canvas (three panels) © Jasper Johns/Licensed by VAGA, New York, NY; Print: Whitney Museum of American Art, New York, USA/Bridgeman Images
Also in This Series