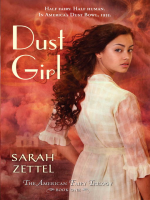 Description
Fans of Libba Bray's The Diviners will love the blend of fantasy and twentieth-century history in this stylish series.Callie LeRoux is choking on dust. Just as the biggest dust storm in history sweeps through the Midwest, Callie discovers her mother's long-kept secret. Callie's not just mixed race—she's half fairy, too. Now, Callie's fairy kin have found where she's been hidden, and they're coming for her. While dust engulfs the prairie, magic unfolds around Callie. Buildings flicker from lush to shabby, and people aren't what they seem. The only person Callie can trust may be Jack, the charming ex-bootlegger she helped break out of jail. From the despair of the Dust Bowl to the hot jazz of Kansas City and the dangerous beauties of the fairy realm, Sarah Zettel creates a world rooted equally in American history and in magic, where two fairy clans war over a girl marked by prophecy.A strong example of diversity in YA, the American Fairy Trilogy introduces Callie LeRoux, a half-black teen who stars in this evocative story full of American history and fairy tales.Supports the Common Core State Standards.
Also in This Series

Formats
Adobe EPUB eBook
Works on all eReaders (except Kindles), desktop computers and mobile devices with with reading apps installed.
Sample Sample Check Out OverDrive
OverDrive Read
Sample Sample Check Out OverDrive
Need Help?
If you are having problem transferring a title to your device, please fill out this support form or visit the library so we can help you to use our eBooks and eAudio Books.
More Like This