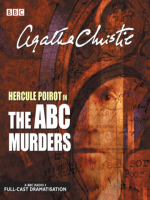 Description
Alice Ascher, a poor, elderly shopkeeper, is murdered in Andover. Betty Barnard, a young waitress, is strangled with her own belt at Bexhill-on-Sea. Next comes Carmichael Clarke, collector of Chinese art, clubbed to death in Churston. Only in Doncaster does the pattern vary: the man found stabbed in the Regal Cinema is called George Earsfield. But each time, an ABC railway guide is found by the dead bodies, and each time, Poirot is warned in advance by a taunting letter from someone signed 'ABC'. Who is ABC? And can Poirot find out in time to prevent the death of a whole alphabet of victims? The police doubt him and the public are in a state of panic, but Poirot is convinced that the murderer's luck will turn, and sooner or later he will make a crucial mistake. And Poirot will be there when he does... This full-cast dramatisation of one of Agatha Christie's most imaginative mysteries stars John Moffatt as the great Belgian detective, Simon Williams as his faithful sidekick Captain Hastings and Philip Jackson as Chief Inspector Japp.
Also in This Series