Catalog Gregor and the Prophecy of... »  eBook » 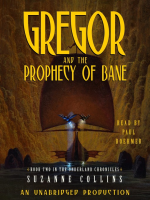 Description
Rich in suspense and brimming with adventure, the New York Times-bestselling Underland Chronicles unfold the fate of the Underland and the great warrior, Gregor. Suzanne Collins is also the author of the bestselling Hunger Games trilogy.In the months since Gregor first encountered the strange Underland beneath New York City, he's sworn he won't ever go back. But when another prophecy, this time about an ominous white rat known as the Bane, calls for Gregor's help, the Underlanders know the only way they can get his attention is through his little sister, Boots. Now Gregor's quest reunites him with his bat, Ares, the rebellious princess Luxa, and new allies and sends them through the dangerous and deadly Waterway in search of the Bane. Then Gregor must face the possibility of his greatest loss yet, and make life and death choices that will determine the future of the Underland.Suzanne Collins has created characters and a world that are capturing countless imaginations. This second installment of the Underland Chronicles is sure to win her even more enthusiastic fans.
Also in This Series