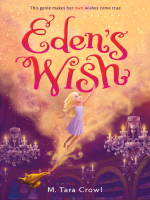 Description
All twelve years of Eden's life have been spent in an antique oil lamp. She lives like a princess inside her tiny, luxurious home, but to Eden, the lamp is nothing but a prison. She hates being a genie. All she wants, more than anything, is freedom. When Eden finds a gateway to Earth inside the lamp, she takes her chance. In a moment, she's entered the world she loves. And this time, she won't be sent back after three wishes. Posing as the new kid at a California middle school, Eden revels in all of Earth's pleasures—but quickly learns that this world isn't as perfect as she always thought it was. Eden soon finds herself in the middle of a centuries-old conflict between powerful immortals. A ruthless organization run by a former genie will stop at nothing to acquire the lamp and its power—including hurting Tyler and Sasha, the mortal friends who have given Eden a home. To save her friends—and protect the magic of the lamp—Eden will have to decide once and for all where she belongs.
Also in This Series