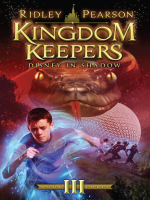 Description
Finn, Philby, Willa, Charlene, and Maybeck search to find Wayne, their mentor and head Imagineer who has mysteriously gone missing. Concerned Wayne has been abducted by the Overtakers—Disney villains, who along with other Disney characters, take over the parks when the turnstiles stop spinning, and want desperately to steer the parks to a far darker place—the five kids pick up a major clue from a close friend, Jess, whose dreams (nightmares, really) often accurately predict the future.
Includes a preview chapter from Kingdom Keepers IV - Power Play
Also in This Series