Catalog Off the Grid »  Books » 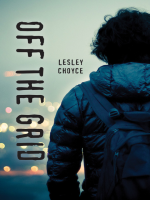 Description
Sixteen-year-old Cody was born and raised "off the grid" deep in the wilderness by idealistic parents. When his father becomes seriously ill, the family is forced to move into the city so he can get treatment. Attending high school for the first time, Cody is an oddity and has a hard time adjusting. He finds unlikely allies in DeMarco, an inner-city kid, and Ernest, a philosophical homeless man, and he begins a tentative friendship with Alexis. When he comes to DeMarco's defense in an altercation at school, Cody finds himself in trouble with the police. A second confrontation puts Cody in more trouble with the cops, and he is convinced he must escape to the family homestead or be arrested. But Cody is torn between fleeing the city or staying with his ailing father and facing whatever consequences come his way.
Also in This Series