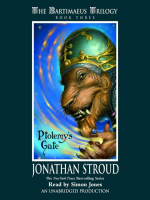 Description
Three years have passed since the magician Nathaniel helped prevent a cataclysmic attack on London. Now an important member of the British government, he grapples with numerous problems: foreign wars are going badly, Britain's enemies are mounting attacks close to London, and rebellion is growing among the commoners. Increasingly imperious and distracted, Nathaniel is treating Bartimaeus worse than ever. The long-suffering djinni is growing weak and vulnerable from too much time in this world, and his patience is nearing its end.Meanwhile, undercover in London, Nathaniel's longtime rival Kitty has been stealthily completing her research on magic, demons, and Bartimaeus's past. She has a daring plan that she hopes will break the endless cycle of conflict between djinn and humans. But will anyone listen to what she has to say? In this glorious conclusion to the Bartimaeus Trilogy, the destinies of Bartimaeus, Nathaniel, and Kitty converge once more. For the first time, we will learn the secrets of Bartimaeus's past, and catch a glimpse into the mysterious Other Place–the world of demons–as together, the threesome faces treacherous magicians, a complex conspiracy, and a rebellious faction of demons. To survive, they must test the limits of this world and question the deepest parts of themselves. And most difficult of all–they will have to learn to trust one another.From the Compact Disc edition.
Also in This Series