Catalog The Elegance of the Hedgehog »  eBook »

The Elegance of the Hedgehog
(OverDrive Read, Adobe EPUB eBook) 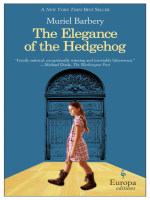 Description
A New York Times BestsellerWe are in an elegant hôtel particulier in the center of Paris. Renée, the building's concierge, is short, ugly, and plump. She has bunions on her feet. She is cantankerous and addicted to television soaps. Her only genuine attachment is to her cat, Leo. In short, she is everything society expects from a concierge at a bourgeois building in a posh Parisian neighborhood. But Renée has a secret: she is a ferocious autodidact who furtively devours art, philosophy, music, and Japanese culture. With biting humor she scrutinizes the lives of the building's tenants—her inferiors in every way except that of material wealth. Then there's Paloma, a super-smart twelve-year-old and the youngest daughter of the Josses, who live on the fifth floor. Talented, precocious, and startingly lucid, she has come to terms with life's seeming futility and has decided to end her own on the day of her thirteenth birthday. Until then she will continue hiding her extraordinary intelligence behind a mask of mediocrity, acting the part of an average pre-teen high on pop subculture, a good but not an outstanding student, an obedient if obstinate daughter.Paloma and Renée hide both their true talents and their finest qualities from a world they suspect cannot or will not appreciate them. They discover their kindred souls when a wealthy Japanese man named Ozu arrives in the building. Only he is able to gain Paloma's trust and to see through Renée's timeworn disguise to the secret that haunts her. This is a moving, funny, triumphant novel that exalts the quiet victories of the inconspicuous among us.
Also in This Series

Formats
OverDrive Read
Sample Sample  Place Hold OverDrive
Adobe EPUB eBook
Works on all eReaders (except Kindles), desktop computers and mobile devices with with reading apps installed.
Sample Sample  Place Hold OverDrive
Need Help?
If you are having problem transferring a title to your device, please fill out this support form or visit the library so we can help you to use our eBooks and eAudio Books.
More Like This

Muriel Barbery. (2008). The Elegance of the Hedgehog. Europa.

Muriel Barbery. 2008. The Elegance of the Hedgehog. Europa.

Muriel Barbery, The Elegance of the Hedgehog. Europa, 2008.

Muriel Barbery. The Elegance of the Hedgehog. Europa, 2008.