Bellevue Branch Library is without heat and closing for the remainder of today, December 4.

Attack of the Black Rectangles
(eAudiobook) 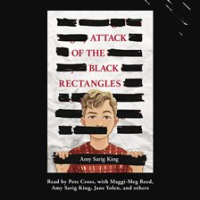