The Tragedy of Hamlet, Prince of Denmark
(eAudiobook) 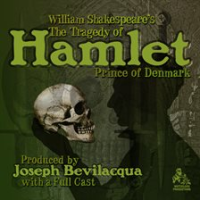