4) Logan Lerman: the perks of being of an action star
Author:
Higgins, Nadia
Choose a Format
+ Book
Show Edition
On Shelf
Antioch Middle - Teen Biography
B LER HIG
Joelton Middle - Teen Biography
B LER HIG
Description:
Click to view
Presents a biography of Logan Lerman, detailing his early life, acting career, and successes. Outlines his roles in films such as "The Perks of Being a Wallflower," and includes color photographs and further reading sources.
More Info
SHARE 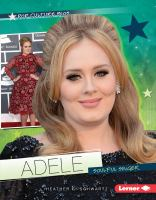 9)  Adele: soulful singer
Author:
Schwartz, Heather E.
Choose a Format
The library does not own any copies of this title.

You may know that Austin Mahone rose to fame after singing and strumming the guitar on his own YouTube channel. But did you know that he:

• Skyped randomly with fans even after becoming famous?

• went on tour with Taylor Swift and even had a food fight with her?

• had to be homeschooled because he got too much attention at school?

Want to know more about this talented star? Read on to learn all about Austin's life before stardom,